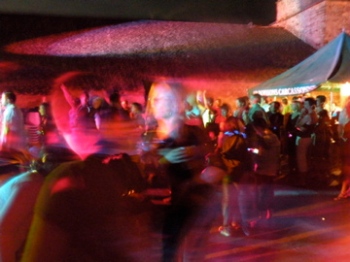 The release of programmes and line-ups for the many festivals around the country is the start to a summer of music, dance, theatre, reading and film celebrations. You name it, we’ll celebrate it and we know how to throw a good party.

The arrival of the unexpected heat and blue skies over the past few weeks was enough to get us all in the  summer mood. I was beginning to envisage long, mediterranean style summer days and the memory of sporting wellies, rain gear and hand warmers to summer festivals became distant and increasingly unlikely.

With this in mind I prepared for my first festival, Bloom, yesterday, by packing a picnic, throwing on shorts and a t-shirt and cycling through the city to Phoenix Park. The day was filled with promise as the sun shone, the resident deer greeted us on arrival to the park and we whizzed past groups out enjoying a spot of cricket and polo.

I was slightly taken aback by the entry fee, a staggering €20. It’s not like you get lots of free stuff, or are paying to hear a band or anything. In fact, the only thing you’re getting for free are titbits at the food stalls, which you have to battle hungry grannies for and with their years of experience you’re destined to be left with the dregs of the goodies.

Don’t get me wrong, I love Bloom, how could you not; pretty flowers, walled and designer gardens and the scent of hamburgers, crepes and coffee wafting through the park. However, it’s more of a market where you wander past stalls, dipping in and out of tents that catch your attention, but ultimately you have to buy the goods.

I didn’t let this taint my mood and we strolled past the flower stalls, out to the food village and met with friends for our picnic. I admit I’d gone all out. Flowery plates, cutlery, picnic blanket, salad, cheeses, crackers, well what can I say, years of practice in London made me a picnic connoisseur.

Of course, as so often happens on our lovely emerald isle, clouds were gathering in preparation to gatecrash our party. A wind picked up and no sooner had I the picnic laid out, the rain begun to fall. This is summer in Ireland. A picnic eaten in haste; a race against dark, ominous clouds bearers of bad news. Rain.

We did what us Irish always do, shivered against the cold, chowed down on the goods and packed up quickly before we were drenched through. Cycling home through the rain, in shorts and t-shirts I felt slightly ridiculous. This is the price you pay for being an optimist. We sped along the quays, crossed the river and as the rain abated, we stopped to watch the birds soar over the Liffey. The sun peeped out behind the racing clouds and we smiled. Despite everything, it had been the perfect day.

I’m ignoring the gale winds and miserable rain outside today, instead I will look to the promise of a summer of long nights, sunshine and the best festivals. Below are a taster of what’s to come over the next three moths

June is always a literary feast with Writers’ Week in Listowel, quickly followed by Dublin Writers Festival and Lismore Immrama Festival. Cork celebrates summer with the Cork Midsummer Festival (21 June – 1 July) where there’s generally something for everyone. Music, dance, theatre and always something to keep the little ones occupied.

An impressive line-up for Westport’s Festival of Music (23 & 24 June) includes The Waterboys, Ray Davies, Imeda May, Macy Gray and Jools Holland. Set in the beautiful grounds of Westport House, the festival looks set to be a ‘not to be missed’ event. Meanwhile, Dublin’s Merrion Square will be taken over by jugglers, comedians and performers who will have you shrieking for joy and sheer fear with their often daring acts, vying for the title at the Street Performer World Championship (9 & 10 June in Cork and 19-22 June Dublin).

Golf lovers will be heading north for The Irish Open in Portrush (28 June – 1 July), while surfers will be competing in surf comps and jamming with the likes of the Kaiser Chiefs, Delorentos, Happy Mondays and Jape at Sea Sessions in Bundoran (29 June – 1 July).

July has a packed programme of events and it’s really a matter of choosing which festival you just can’t miss. July in Galway is one big party, from sailing with the Volvo Ocean Race (6-8 July), Galway Film Fleadh (10-15 July) followed immediately by the popular Galway Arts Festival (16-29 July) featuring acts like Christy Moore, The Coronas, Lisa Hannigan and lots more.

Another great arts festival is the Clonmel Junction Festival (6-15 July) where you can enjoy comedy, theatre, dance, music and entertainment for children and families. West Cork Literary Festival (8-14 July) will be calling all book lovers, while Ireland’s largest music festival Oxegen will be pulling in the crowds for some major headlining acts. Those in search of something a little smaller may want to head to Castle Palooza (3-5 August), a quirky music and arts festival on the beautiful grounds of Charville Castle, Tullamore.

In August, Waterford puts on quite a show with Spraoi (3-5 August), a fantastic arts festival suitable for families. Kilkenny Arts Festival (10 – 9 August) has a great programme stacked with music, theatre, craft, workshops and literature over the 9 days. Get ready to be dancing and singing to the Irish tunes at the vibrant Fleadh Cheoil na hEireann (10 – 20 August) in Cavan.

I could keep going, but then I could not go out and enjoy this beautiful weather.