Tucked away in central Turkey, Cappadocia is overshadowed by the beach resorts of Kuşadası and the cosmopolitan Istanbul. I’d watched a documentary on it years ago and was intrigued by the beige landscape adorned with clusters of rock pedestals resembling overgrown mushrooms. The camera drifted across other peculiar rock formations, lovingly referred to as ‘fairy chimneys’. It was like a scene out of Star Wars or The Flintstones. Windows and doors hollowed into the soft rock were the only sign of the life hidden within the rock. Surely, this is where Fred and Wilma live?

I put Cappadocia on my places to visit, not actually thinking I’d make it there anytime soon. As they say, you never know what’s around the corner and when an email popped into my inbox from Turkish Airlines saying they were doing a trip to Cappadocia, I knew I had to go. 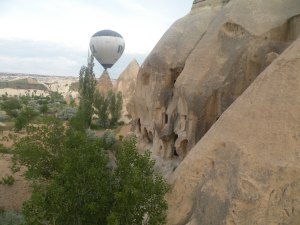 I’d seen the shots of the bizarre rock structures and cave houses, but what I didn’t know was that the area is steeped in history. Tales of war, religion, underground villages and population exchanges had been omitted from the documentary, but our guide made sure we were informed on the region’s colourful past.

Tomorrow on Ireland AM at 8.45am I’ll be talking about my trip to Cappadocia; explorations of cave houses, dining in cave hotels, deserted monastic settlements, Dervish dancing, pottery making and the survival of Christianity during a time of oppression. I’ll also chat about the fab Istanbul. In the meantime, you can read about Cappadocia here.

NOTE: I travelled with Turkish Airlines to Istanbul and Cappadocia and Asia Minor Tours arranged logistics of tours and guides on the ground. Thanks to both!